And that they offered me a four book deal? Seriously, it was my first multi-book contract. This was big. Huge.

Sure, there'd been rumors in the past of dissent, but that was all a long time ago. I sincerely was excited and thrilled and told everyone about my accomplishment, my new contract.

I haven't shared my "confidential" emails during this whole debacle, but the company no longer exists so I no longer owe them silence. While others spoke out, though, I stayed silent. Why? I was ashamed. I was "salty" as the kids say. I was frustrated.

You see, they randomly decided to stop sending me my royalties. The last payment I got was in 2015 for the period ending in August 2015. My emails inquiring about it were either ignored or otherwise blown off.

And the statement they DID send back in 2015? I mean, I can't help but laugh about it. One title--they said it sold one copy on All Romance Ebooks.

I can click on the title. I can see that it was an ARe bestseller.

Usually... it takes more than one copy, I would think, to earn that bestseller star.

It also had a pretty good rank at Amazon and on other places, too... as did the others, but I couldn't PROVE they hadn't paid me based on my statements. All that proved was the accounting probably wasn't accurate. Maybe one copy did make it a bestseller? So, without proof, I just emailed EC about missing royalties and got ignored.

I didn't say anything publicly because when the authors spoke out, they said, "How do you know they owe you money, if the statements don't say so?" Well, in my case, that little silver star, but okay. I'll keep my mouth shut. Maybe they'll make it right.

Then, yesterday, I got this in the email.

My favorite part is the sentence that says they're not checking email. Probably a good call. Probably a lot of people would have questions, especially after their "official statement." 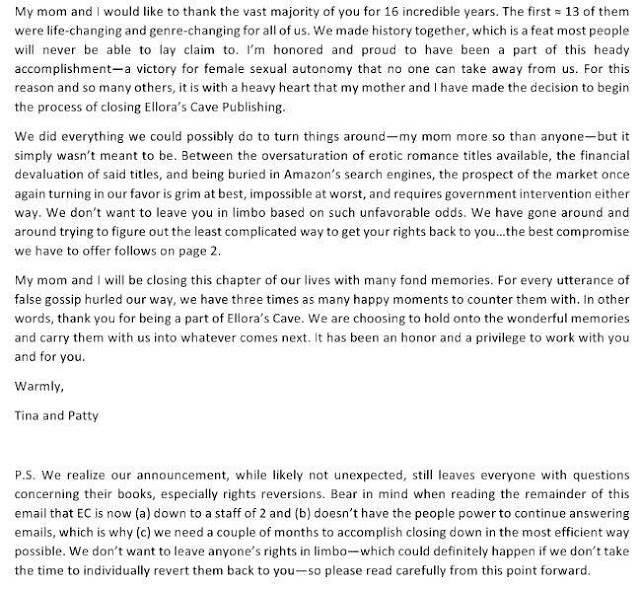 Do you see the P.S.? I like the passive aggressive threat they tacked on there. "We don't want to leave anyone's rights in limbo--which could definitely happen if we don't take the time to individually revert them back to you--so please read carefully from this point forward."

What was included after that, you're wondering? No worries, I'll share. 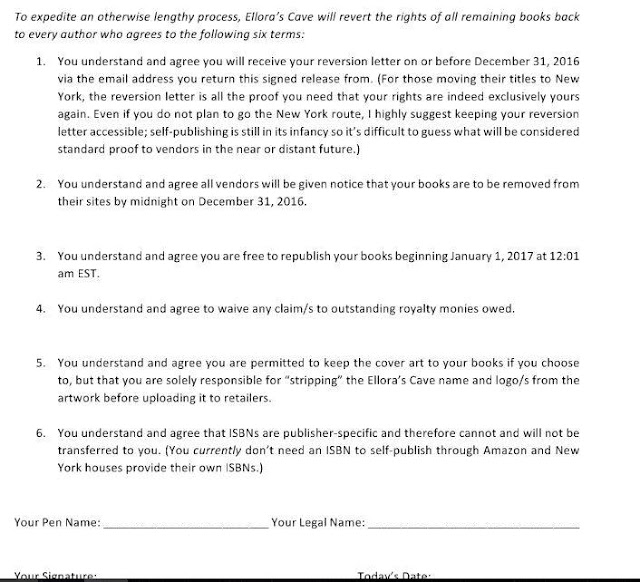 I'm not going to agree to those terms. They owed me outstanding royalties and have no intention of paying me whatsoever. They want me to agree to that, and I will not.

No, this will not put me in a position to get my money back. Yes, this means those four stories of mine are likely getting dragged to bankruptcy court with the rest of the Ellora's Cave madness.

Why would I do that?

Because just as I've had to see their name and twitch helplessly without recourse, they will continue to see mine. They took a dream, squashed it, took the squashed remains and stomped them, and then made me continue to look at the leftover shards for years now.

Ellora's Cave? My name is Virginia, and I hope that my name pops up on your desk as a reminder of what you did just as yours has continued to pop up on mine for so very long.
at 5:06 AM