Who is being featured???

If you guessed me, go buy yourself a cookie!!!

On a serious note and with appropriate happy dancing...
I am being featured over at Night Owl Reviews!!!!

Clothing Optional got reviewed by Coffee Time Romance!!!!
Four Cups of like!!!
*Woot*
While I am off doing a happy dance, here is the review!


"The groaning and moaning inside Brie’s head is as much desire as it is frustration. She is in serious lust with her best friend…and heaven help her, his boyfriend!

There is no way Murphy wants to endanger his relationship with Brie, but he cannot deny that Andy is right. The feelings they are having for Brie are so not platonic, and if they screw this up, all of them will suffer.

Vacationing with her best friend and his boyfriend is the perfect way for Brie to get it into her head once and for all that Andy and Murphy are made exclusively for each other. She can see the desire in their eyes when they look at each other, but when those eyes turn on her, a shiver runs straight to her core. Murphy and Andy must make a choice, because Brie is just too precious to let slip through their fingers.

Like that first spoonful of rich velvety ice cream, these three are entirely too luscious to stop at one bite. There is real concern and caring among Brie and the boys, and that comes pouring through with every action. They are friends first and foremost, and that is such a delicious way to start something this wonderful. I just wanted it to keep going and going and going."

You can view the review here. 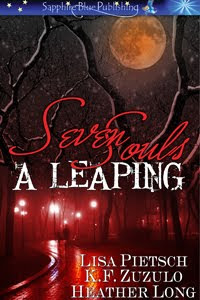 A new anthology from some of my favorite authors released today! Check it out!

Seven Souls A Leaping is an anthology of three interconnected tales of love, danger and a war against evil written by Lisa Pietsch, K.F. Zuzulo and Heather Long.

At the New England New Age (NENA) Investigations, no case is too weird. The paranormal detective agency relies on the familial talents of siblings Duncan and Samantha MacDougal and their cousin Tara Conroy. While Duncan and Samantha tend to the field work, Tara mans the office tapping sources in both the physical and spirit world. Fate takes a hand when a killer named Jeffrey Wiles begins a death-dealing spree that puts the lives and loves of these investigators on the line.

Danyelle Roy is a private investigator feeling the pinch of the economy. When she begs her friend Murphy, a bail bondsman, to give her some work, he does so reluctantly. Jeffrey Wiles isn't the kind of criminal you want to send a cute redhead after. He slaughtered a 13-year-old girl while her parents slept and then used her blood to paint Satanic graffiti on the walls. Duncan MacDougal is a specialist in paranormal investigations and he's never seen anything like the Satanic spellcasting done by Jeffrey Wiles. When Duncan and Dani team up to capture Wiles, the magic is overpowering.

Samantha MacDougal can see auras. Her gift usually helps her pursue rascals and wraiths for her family’s business, New England New Age Investigations. But when she begins to track Satanic serial murderer Jeffrey Wiles along icy Boston streets, her own life’s light is in danger of being extinguished. She is alone in her struggle until handsome Boston detective Ike Marshall mysteriously provides a supernatural shield of light that warms her as never before.

Since the day she learned to put her ABCs together, Tara Conroy has been sharing a ghostly correspondence with the spirit world. One spirit, in particular, Darian, has been talking to her since she was twelve years old. His letters take a darker turn as she and her cousins hunt down killer Jeffrey Wiles.

Darian Barnes ran afoul of a witch in 1929 as the stock market crashed. She cursed him, and for nearly a century Darian has existed as a spirit, always seeing, never touching or experiencing, until one day he encountered Tara. For the first time in eighty years, someone could hear him. He watched over her, guiding, protecting and advising—always there when she needed a friend.