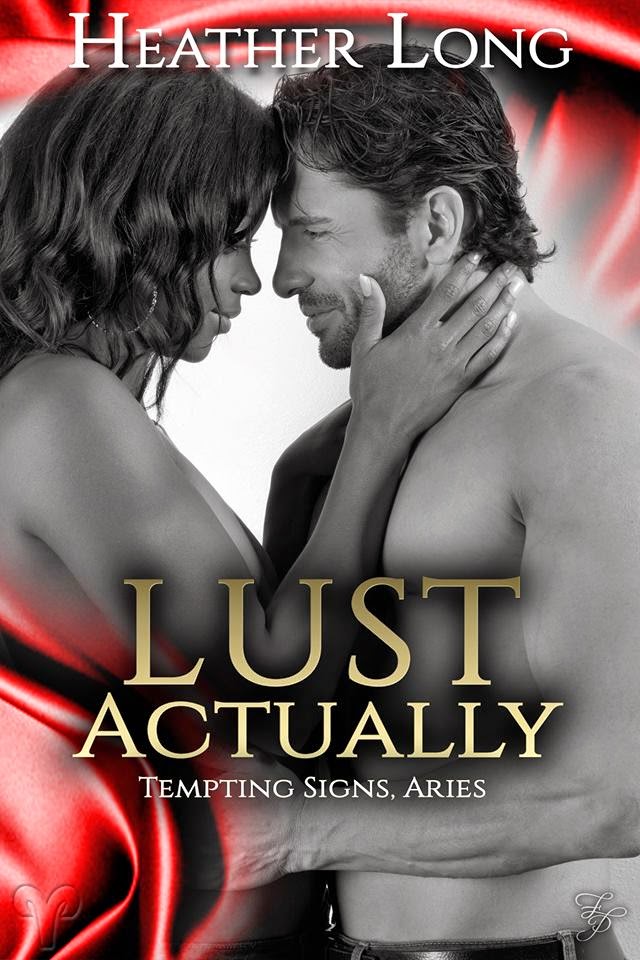 Ethan Andrews makes his living reading people and tailoring his sales pitch to what they want. He lives his life on the road, traveling from city to city, hotel to hotel, and it all works for him until he meets Norah Silver—the woman he wants to come home to.

Norah Silver has a plan, one that requires focus and dedication. She’s working sixty to eighty hours a week between her two jobs—one for money and the other for her passion. She thrives on giving solid relationship advice that may be based in the stars, but also grounded in reality. The last thing she expected was to find a sizzling love connection of her own.

Sparks fly when these two stubborn Aries launch into an impulsive relationship. Telling themselves lust is actually enough turns out to be a lie, but can these rams bend enough to recognize it or will their off the charts chemistry explode before they really get started?
at 7:09 AM No comments:

When I was a kid, I knew I'd grow up to be an astronaut. Clearly, my great love of science, discovery, and the stars wouldn't have been wasted on someone not meant to explore the stars.

I knew I was the sort of person who planned things, so I'd get out of high school, go in the military, use the GI Bill to help afford college and then, after a few trips to orbit earth and do research, I'd get married and have two kids. I'd ow n a home, have a lawn. Maybe a little garden in the backyard. I'd never own a dog--I'm clearly a cat person.

They were solid plans. I did go into the military... for about a second. I came home really excited to see my fiance.

Got pregnant. At that point, turning twenty the year she was born, people said I'd given up any shot I might have had at my dreams. Which was okay. I still drew and wrote. I loved art and books and never did give them up entirely. I wished I was the kind of creative person who could tell stories, but I was a poor mother, married to a poor man, and we'd be lucky if we managed to raise our child without failing.

On my twenty-first birthday, I planned to go out and drink and party. I took a test just to be safe and found out I was expecting our second child. Panic ensued, followed by optimistic words from my husband about how I wasn't pregnant, we were pregnant.

We split a few months later, leaving me a pregnant single mother of one at only twenty-one.

I never planned to be a single mother.

But I could still do this. I'd manage to buy a house, because that was what parents did. That was how you set down roots.

A few years later, I had a third child, but managed to buy a house.

It turns out home ownership made me miserable. I had these great kids, but had to work constantly to afford it. The daycare provider saw the baby take his first steps (I went back to work one week after my second child, two weeks after my third because I'd managed to save a week of vacation time up for the event)... saw his first tooth come in. He even said his first word while I was at work.

I had these three great kids and I was missing out on their life. For what? Because you were supposed to own a house.

I hated the house, hated the maintenance, hated owning something beautiful we only got to visit once in a while and then to simply sleep in it.

I had a stroke. Apparently, you're not supposed to do to your body what I did to it to try to afford the life I thought we needed. You're supposed to sleep, to not walk around in a constant knot of stress and panic.

I reevaluated my life. I'd always written, but never sent a word out because I feared being rejected.
I owned a house that gave me no pleasure because I only had it because that was what 'good' parents did--they owned homes.

I had managed to do everything that was supposed to make me happy and nothing did.

So what did make me happy? I loved my kids. I wanted more for them...but was I giving them what would make them happy or just the things society told me they needed to be happy?

We eventually ended up in a temporary home--a couple hundred year old barn situated on a bucolic piece of land in the country. I could afford it pretty easily and still have a bit left over for the things we actually needed--food, wifi, older cars that we paid cash for rather than getting loans so that they were shiny and enviable.

We're still in that temporary home five years later. We love it here. It fits us perfectly, fills our needs, makes us happy.

I quit my job almost four years ago and returned to school. Things were tight--way tighter than when I worked outside the home all the time. But we were together, so the name brands/impressive things I thought we needed to prove we were doing well mattered less and less.

I gave my imagination wings, allowing myself permission to write stories and paint pictures. It turned out that other people liked my stories, liked my art. We were far from wealthy, but we had each other.

We collected a ragtag bunch of pets along the way--two poisonous frogs, a giant tank with giant gold fish and one albino frog, a few cats who decided they owned us and one dog which was way bigger than I ever planned. Besides, I'm a cat person.

I like the dog better than I like the cats. He's my loyal friend, a pet bought for the kids who brings me more joy in a day than I realized an animal could bring.

I have friends who I love, family, and I laugh way more than I cry.

When I work through the night to finish things--be they homework or author/editor work--I'm doing something I love and I get to see the finished product. I'm proud of the things that cross my desk, proud of my contributions to the world and to history.

I thought we needed to own a big house, a new car, have name brands on our clothes to be happy. It turns out we didn't need any of those things because proving we're happy isn't nearly as important as actually BEING happy.

Nothing in my life worked out as I planned, so I don't make as many plans now. I take each day as it comes, do the best I can with it, and go to bed with an unweighted heart.

Others look down their noses, judge us because we haven't got much and likely never will. I can't prove that we're doing well with the things we own nor can I promise my children they'll ever own all the things their friends do.

But I tell them about the things I've learned in my almost forty years on this planet.

Coming in April to the Black Hills Wolves series, now available for preorder! 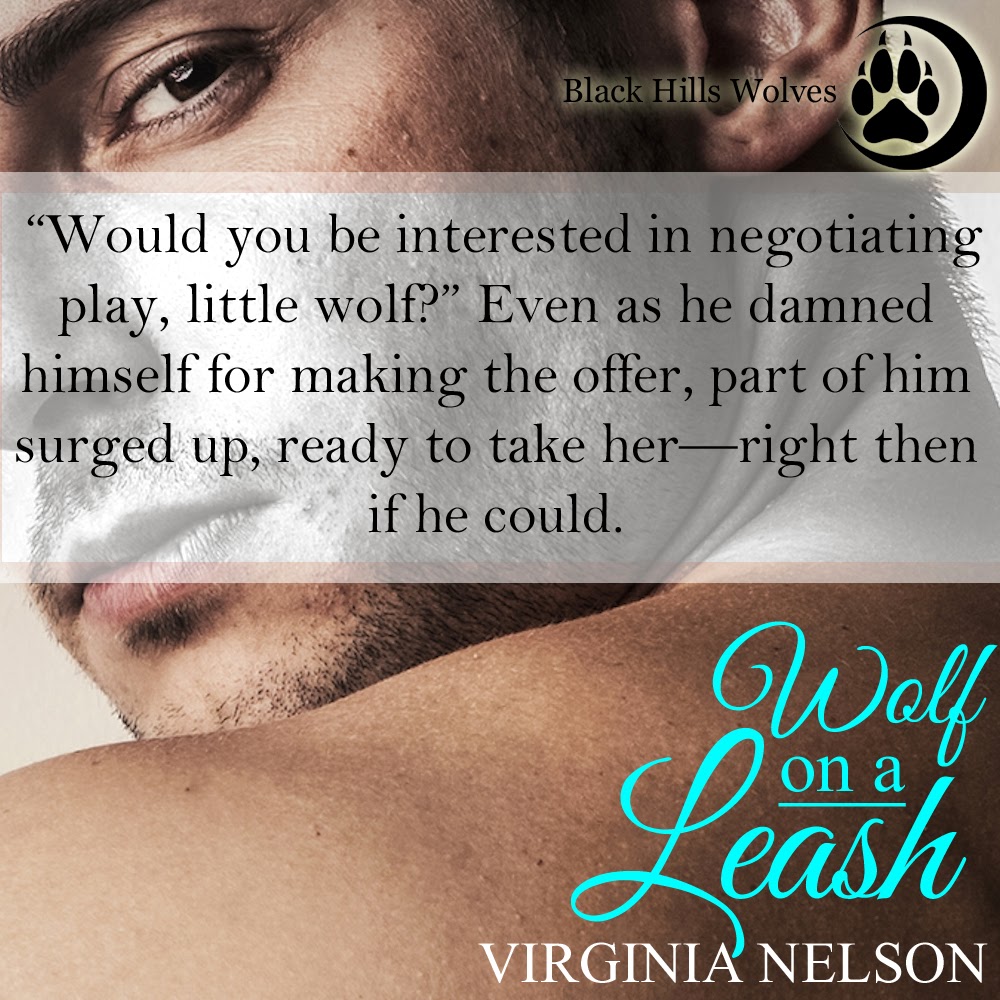 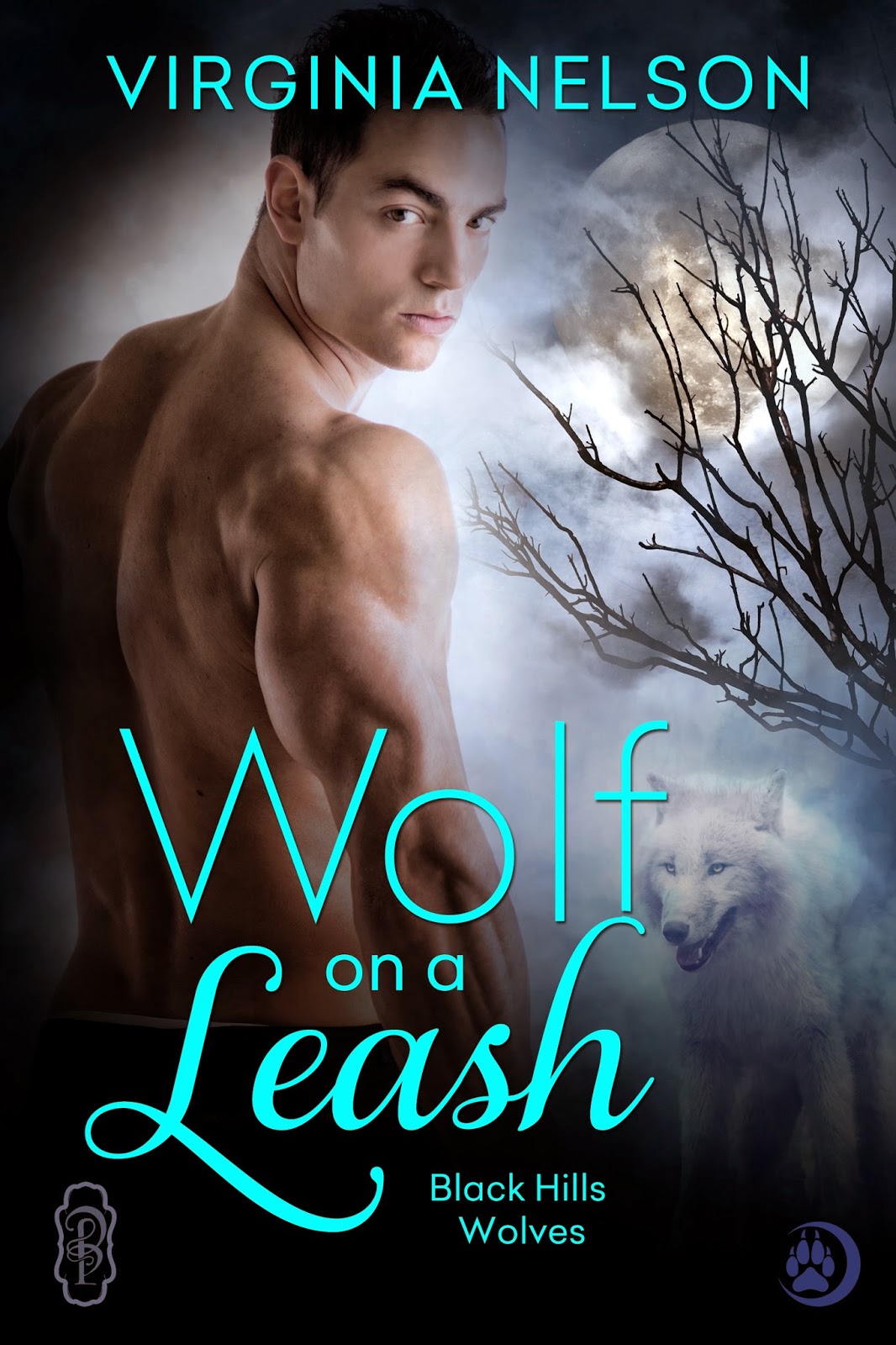 
Longtime submissive, Patch Williams, never quite finds the release she seeks. When a new Dom comes to town, offering play she’s never tried before, it’s a battle to give into the pleasure he offers while keeping her wolf nature a secret.

Home from overseas service, Kennedy Laurie realizes a few things about himself—he only gets off when a little sadism is involved, and he’s terrified of going too far, getting lost in the play. Patch might be just the submissive he’s been dreaming of.

Patch recognizes the call to mate…but with an out-of-towner? Her body demands for her to submit, to tell him everything, but can her Dom tame the Wolf on a Leash? 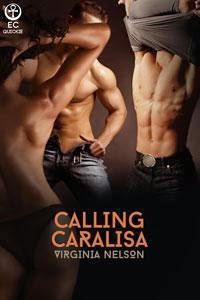 The rumors of a Wakening creating triads instead of mated pairs reached Caralisa months ago, but she doubts an undesirable record keeper such as herself will be one of the ones called to power.

Bentley, sees more than the bookish façade Caralisa hides behind. When dreams tell him to wait, to resist the call to claim her, he realizes his premonitions might be the key to his future happiness. 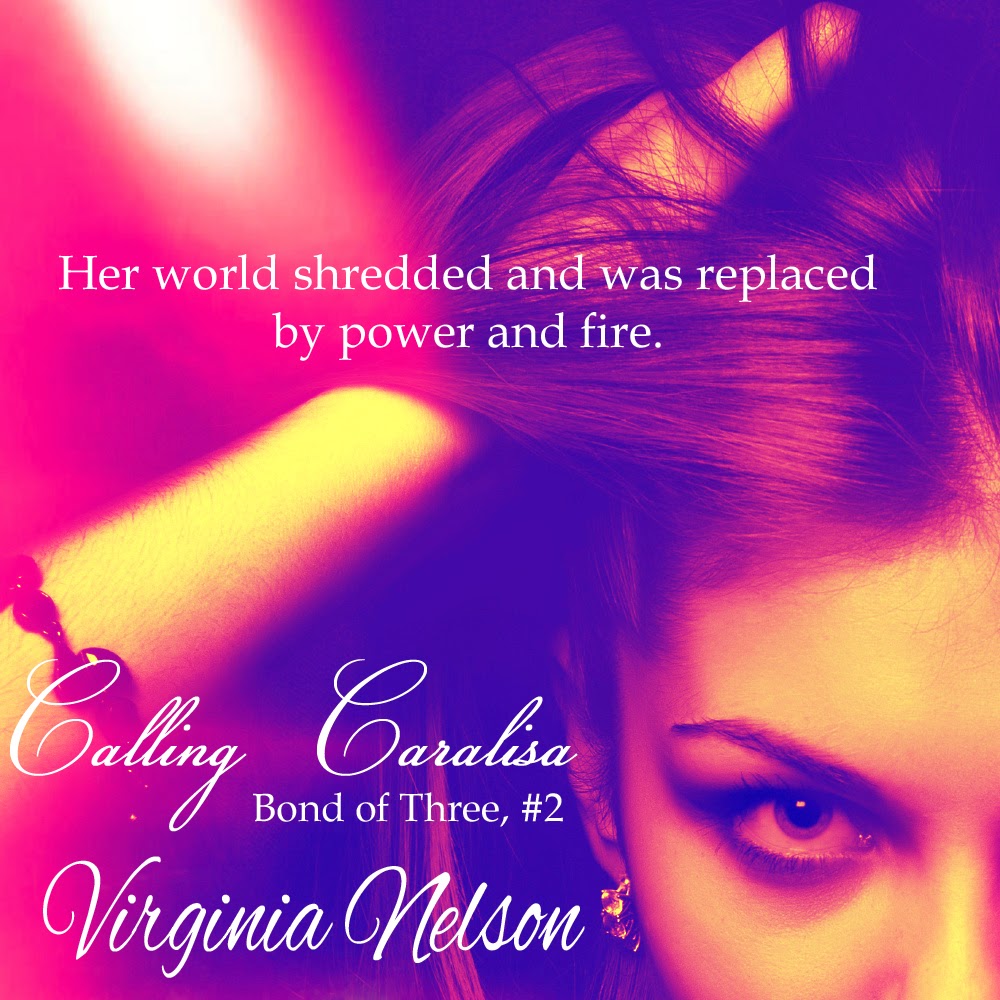 Jackson fought against his fate, resisting destiny’s demand he accept a shared mate. One hot and hurried encounter with Bentley changes his mind and before he can second-guess his desires, he joins Bentley in the hunt to seduce Caralisa.

As the three come together in a heated clash of skin and a passionate tangle of limbs, they’ll discover all the delights of a bond of three. And move their society one step closer to salvation.

Back In Time #ReleaseDay #NewRelease #SecondChanceRomance 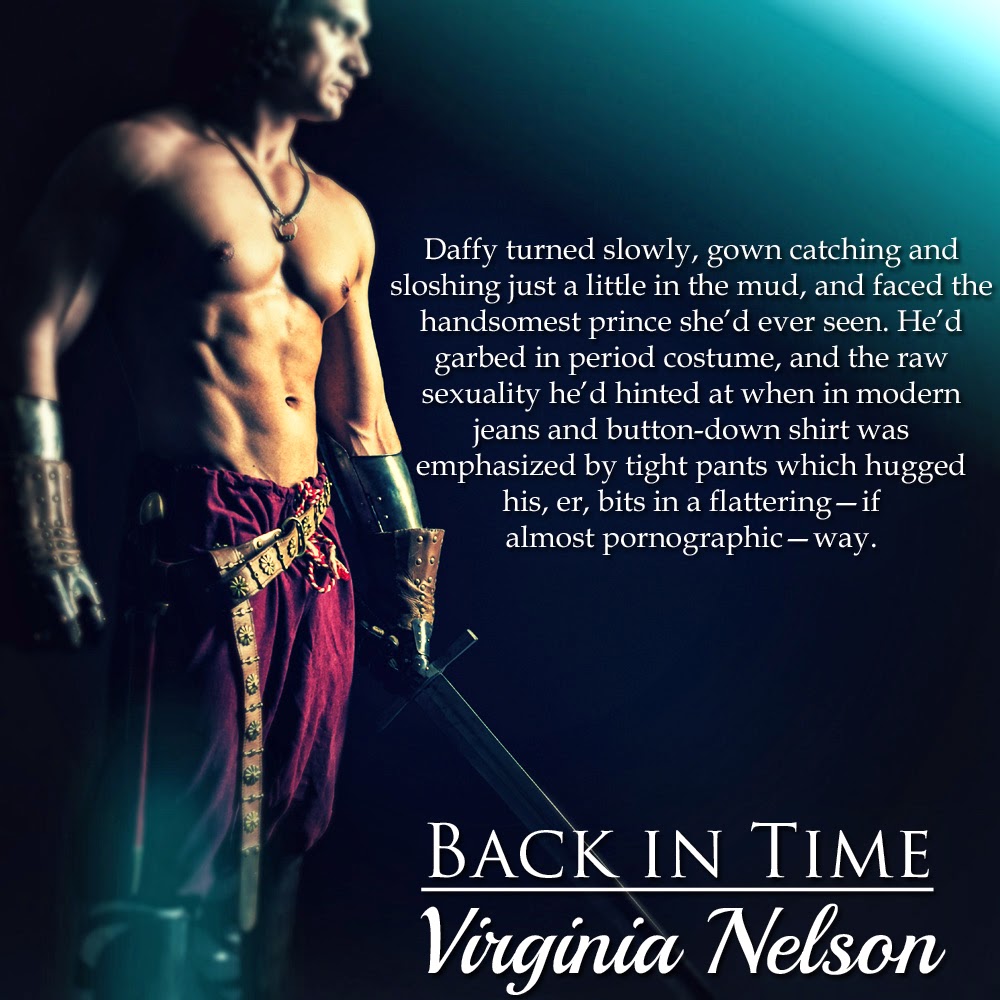 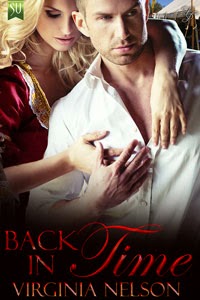 BACK IN TIME
Virginia Nelson

Lady Daffodil Davola grew up traveling Ren Faires with her family. She’s not ashamed of living life off the grid, content with her world and the bawdy band of misfits and wanderers who share it with her.  She doesn’t seek the approval of the outside world…not even from the one man who ever made her want something more.

Gregory Wilder grew up in a family obsessed with politics, determined to become movers and shakers. He remembers a fluke visit to a medieval faire and the girl he met once upon a time. After a messy divorce, he’s determined to find her and see what if…

Assigned to play King and Queen, they have to work together for Knight’s week, like it or not, because Daffy’s father insists. Can they make it through a week without killing each other, or will they end up Falling Back In Time?